Does Reese’s Want to be the Official Candy of the Vatican?

This is what you get when copywriters who don’t have a firm grip on spelling and phonetics write your ads:

When I first saw this Reese’s® Minis print ad several months ago, I did a double-take at “popable,” which pinged in my mind’s ear as “pope-able.”

Using this spelling, the past tense would be “poped.” Have you ever seen popcorn poped? Or a balloon poped?

Soon after, I came across another ad with similar wording, for Starburst® candy. 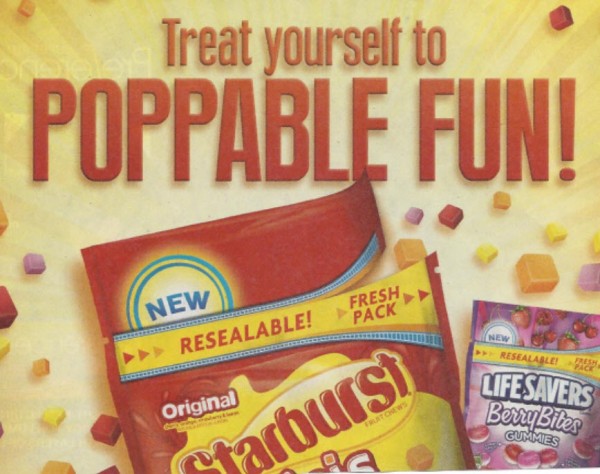 I don’t think the double “p” detracted from the message. Do you?

Then the other night, Reese’s took it to the next level with a TV commercial:

[2015 Update: There was a YouTube video here, but it no longer exists. The ad also used “popable.” I’m thinking Reese’s repented over their misspelling ways.]

Now I wonder if they’re hoping Pope Francis will notice and perhaps cut an endorsement deal.

Words get made up in advertising all the time. But they work only when they’re clever and not spelled so that literate potential customers will be inclined to mispronounce them and miss the point.

Call me old-fashioned, but I think Reese’s would have done better to stick with their previous description for Minis, which was “perfectly tiny.”

Why Proofreading Should Never be Optional

I was recently looking for a new healthcare provider and responded to a well-written, slickly produced brochure I received in the mail. The practice sent me an impressive “Welcome” package that contained two paperback books, which both appeared to be self-published.

One was a thoughtful, substantial work by the physician about his specialty. As self-publishing goes, it was impressive, but there were a few typos. Not a big deal.

The other book was a collection of first-person patient testimonials, accompanied by their full names and, in some cases, photos.

I found typos, usage errors, spelling, and punctuation problems on virtually EVERY PAGE.

The question it raised was, “How can a doctor take such pride in helping his patients feel better, and then leave them swinging like semi-literates in the breeze in PRINT?”

When I met the physician, he was bright and articulate, and I think flummoxed when I told him those testimonials don’t project the image of his practice that he undoubtedly had in mind.

He said, almost apologetically, “Well, they made all those mistakes.”

Since these weren’t professional writers, they probably assumed that this highly educated man would fix their mechanical errors and present their stories in the best light.

I’m guessing he saw it as a matter of honor to publish their words verbatim. But, unless there’s some legal consideration, it’s NEVER a good idea to leave in mistakes that make the writer look careless, inept, or downright ignorant. It makes you look just as bad — maybe even worse if you spent a small fortune having those errors preserved in a book.

ALWAYS proofread and clean up the wording. Every mistake you let stand detracts from your own credibility.